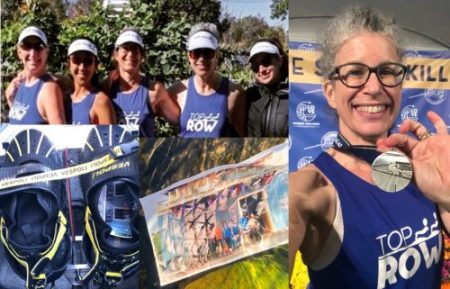 After docking at the end of my very first Learn-to-Row class in New York City on the Harlem River, we all clambered out of the training barge and posed for a group photo. Bundled up against the spring chill that day in 2016, we staked our oars proudly on the dock and smiled.

I loved that day. I hated that photo.

I had adored plying my first strokes at age 52, that satisfying work of pulling the blade through the water. But the picture, with all of its thousand words, shouted that I was very overweight. It jeered at me and provoked the shame that my appearance neither inspired me to pride nor reflected my readiness for the challenges ahead.

I dove into Learn-to-Row anyway and fell head over heels in love with rowing. The full-body exertion, the nerdiness, the exhilaration of being an absolute beginner. Then winter came and I yearned for March, when I’d be back on the water.

In late February, my friend Melinda called. Actually, she called three times over a few weeks. She and another friend had joined Weight Watchers. Did I want to come? I was reluctant. I didn’t want to know how much I weighed. I don’t like being told what to eat. I didn’t want to admit that I had to change. But I desperately wanted to be a rower. I wanted to enjoy fashion again, and I wanted my outsides to show the strength I felt on the inside.

I took the plunge and experienced success beyond what I could have imagined. Because I was rowing and erging most days, I lost 10 pounds a month for eight months straight. Efficient and direct, just like a good catch and drive. Then 20 more pounds went, and in 14 months I had lost 100 pounds. I felt great, looked like the athlete I was becoming and hated that photo taken on the dock even more.

This season, 2019, was my second year on the TopRowNYC racing team. It brought the honor of rowing in a masters women’s 4+, our club’s first-ever entry in the Head of the Charles. With an average age of 49.5, we were the oldest boat in the 40+ category and trained hard.

During those practices, I thought back over the past four years and began to formulate a secondary HOCR plot line of my own.

That Saturday in Boston, while we checked the boat, I tucked a print of that hideous Learn-to-Row photo into my shoe. We launched and raced, holding our position the whole course. There were all the thrills I’d been promised: cheering crowds, intense focus, mental and physical determination, bellowing coxswains and clashing oars.

Exhausted and satisfied, we returned to the dock. I unstrapped my feet, took that effing, stomped-on, crinkled, splotchy photo out of my shoe, reached out over the side of the shell and drowned it in the Charles River.

As I watched the photo sink, I breathed a sigh of gratitude. This was the hard-won period at the end of a years-long long chapter of self-revelation and reinvention. Earlier, my crew mates and I had given each other token commemorative gifts. I had made each awesome woman a small charm with two words unique to her and this race. I had also made one for myself. My words: “Future Found.”

The following weekend in Philadelphia, our TopRowNYC Masters mixed 4+ took silver at the Head of the Schuylkill. Wearing that delicious hunk of gleaming success around my neck, I beamed with pride as we posed for the camera on the podium. I truly love those photos.

If you’d like to share your story in our “Amazing Women Masters Rowers” series, please email contact@whywerow.com.

Why We Row celebrates the unique lives and incredible stories of Women Masters Rowers. View all posts by Vreni Hommes