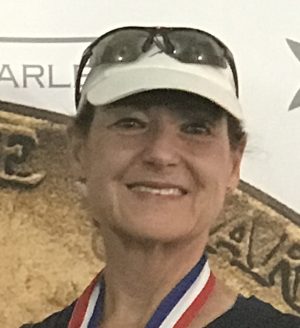 What rowing moment you are most proud of?
Does anything compare with the Head of the Charles Regatta?! In the 12 years that I have been rowing, I have had the good fortune to compete in that incomparable fall classic for the past eleven years in both sweep and sculling events. My proudest moments — sharing the HOCR podium with Sara Sargent after winning the Women’s Veteran 2x in 2016, 2017, and 2018.

How has rowing shaped you?
I was 61 when I found rowing — a sedentary 61 who had always tended to opt out of situations that involved competition or that might put me in the spotlight. Being overweight for most of my life no doubt contributed to this lack of confidence. I had never been involved in a sport, but on a whim, I signed up for a Learn-to-Row class because I’d seen adults rowing 8+ in Princeton and it looked like fun. I still remember, however, the apprehension I felt at the beginning of the 2006 Learn-to-Row class. I was the oldest and least fit in the group of 40 trainees. From the first session, however, I felt encouraged by the coaches and mentors in the program. That support, and the magic of being out on the water at dawn touched me and I took the next step by joining Carnegie Lake Rowing Association. Little by little, I came under the spell of rowing. It didn’t hurt that in my first race, our 8 won, and I got my first hint of the bonding that can happen with shared effort and why rowing has been called the ultimate team sport.

Feeling I had little time to waste, I soon bought a double and then a single. I became “coachable”, then focused, fit, and finally competitive in my age group. Winning gold for Carnegie Lake in the WG1x at the 2013 Masters National Championship and being recognized as US Rowing Fans’ Choice Masters Athlete of the Year in 2014 further boosted my self-confidence. Shortly after that, I was invited to join Vesper Boat Club as a member of the masters women’s 8+ and Fairmount Rowing Association where I train in the double. In all, I’ve competed in six FISA World Rowing Masters Regattas with Masters International.

Rowing has not only transformed my lifestyle but has also helped me achieve and maintain a healthy weight. More than that, rowing has given me priceless experiences and innumerable bonds forged on and off the water with new friends here and abroad. I developed my passion for rowing later in life and now at 73, I take every opportunity to encourage and mentor other women, especially those of “a certain age” to do the same.

What’s the biggest challenge you’ve had to overcome to row your best?
I have advanced osteoarthritis in both knees that has worn away the joint cartilage. While this makes getting into and out of the boat challenging, the rowing stroke helps strengthen the knee muscles and keeps the joints from becoming unstable –another reason to get out there as often as possible.

What are the biggest life lessons you’ve learned from rowing?
Life is now. In my relatively short time as a rower, I have lost more than one teammate to an early or sudden death. Others have become incapacitated by disease or age. Today is the day. Enjoy every stroke. To succeed you must be fearless. (That goes double for the single!)

What inspires you to keep rowing?
Rowing is an interest I share with my husband. Besides the physical advantages of continuing to row as we age, there are other rewarding aspects of the sport. It has become a central part of our social life. Our teammates, partners, and competitors continue to motivate us to set goals and train hard. Among the most inspiring relationships are the friendships formed with several elite senior rowers, many of whom stay with us whenever they are in Princeton. Their dedication and mental toughness are really motivational.

What do you like most about rowing a single or with others?
As a sculler who most often “coxes from the bow” in doubles and quads, what I like best about the single is the ability to focus without talking. No other boat class is more challenging or more rewarding. The 1x is the ultimate test of mental toughness. By comparison, in the team sweep boats I am inspired to give my fullest effort for the common goal. Both are thrilling.

What are you currently working towards as a rower? as a competitor?
Inspired by older teammates who are still amazing rowers, I am working on maintaining my strength and aerobic fitness to be able to continue to row for years to come.

As a competitor, my goals are:
• be an asset in every team boat
• show up and do my best in single sprints
• row another thrilling 2x race at HOCR
• compete at the 2020 World Rowing Indoor Championship in Paris next February
• row in a “parent/child” event with my 14-year-old granddaughter who will be joining us in June at Craftsbury Sculling Center for her first rowing experience.

What advice do you have for other women rowers?
• Find a mentor — someone who is doing what you aspire to do.
• Maximize your boating options — learn to sweep both sides, scull, cox.
• When learning to scull, use a mirror early on, you won’t regret it.

If you’d like to share your story in our “Amazing Women Masters Rowers” series, please email contact@whywerow.com.

Why We Row celebrates the unique lives and incredible stories of Women Masters Rowers. View all posts by Vreni Hommes